Gregory Creswell is looking forward to serving his fellow residents of the Fourteenth District as their representative in Congress.  He humbly asks for their vote in November.  As their Libertarian representative, Gregory Creswell will never forget that the government belongs to individuals, and not the other way around.

Prior to the 2012 election, the district boundaries have been redrawn, including very little of the old district, but covering a good portion of Detroit, Grosse Pointe, Southfield, Farmington Hills, Pontiac and a few other places in Oakland County, Michigan. 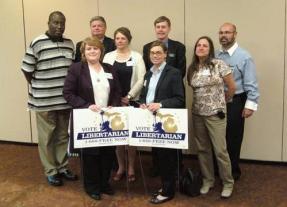 Creswell’s position statements focused on what he called, “racial preferences.” He was the only gubernatorial candidate supporting the Michigan Civil Rights Initiative, and he defended the validity of the associated petition effort. His position statements referred to Affirmative Action as “state-sponsored discrimination,” when it set different standards based on a person’s race or gender.He claimed this was the position of the Libertarian Party of Michigan which addresses this topic in its platform.

In his position statements, Creswell said his approach to civil liberties was based on the belief that people should be free to engage in any “peaceful and honest” activity. He claimed he would protect civil liberties by supporting equal rights for gay couples, medical marijuana, and “the right to keep and bear arms.” He also claimed there was a link between civil liberties and fiscal responsibility.  He also opposed restrictions and taxes on internet transactions.

Creswell rejected “government planning,” and expressed the belief that what he called a “free-market economy” would create jobs, lower costs, and improve the standard of living. He supported changing government policies by letting the single business tax expire (without replacing it), cutting the budget, ending what he called “corporate welfare” and lifting regulations which he claimed were “burdensome,” on small businesses.He also opposed restrictions and taxes on internet transactions.

He claimed that politicians didn’t created jobs but, “…only shifted jobs from the private sector to government employment.” He accuse them of rewarding “mismanagement and irresponsibility” with “taxpayer funded bailouts.”

While opposing mandatory taxes, Creswell supported what he called a “Tax me more fund,” so those who supported higher taxes could pay them.

In his position statements, he advocated the removal of taxes on private property, fuel and the internet. He also supported the privatizing licensing. He claimed that many licensing laws were “designed to entrap people.” He argued that people should not have to “…spend more on permits than materials to improve their homes.” He called for an end to what he called the “abuse of fines and forfeitures.”

Creswell said politicians should stop “wasting money” on what he called “non-violent crime.” In his published statements, he accused politicians of keeping people in prison who were no threat to the public. He argued that it was too expensive to use prisons in this manner when people had what he called “real expenses.” He articulated the belief that prisons existed to protect citizens from what he called, “brutal criminals who would not hesitate to prey on others,” and said it was a “waste” of money and “immoral” to imprison people for what he termed, “unhealthy alternative lifestyles, seeking non-traditional medicine for terminal illness, or trying to relieve the suffering of others.

If elected, he vowed to pardon “people imprisoned for medical marijuana, physician assisted suicide, non-payment of taxes, and substance related charges.” He supported what he called, “penalties that result in restitution to the victims and the taxpayers” for what he referred to as “non-violent property offenses.” He also spoke in favor of diverting more money to arresting those he called “violent offenders,” and “enforcing laws against theft and fraud.”